How to Distinguish Fake News From the Real Thing.

Media literacy classes, which are starting to be adapted in more schools, instruct students how to decipher fact from fiction in the ever-growing age of false media claims. We can take some of these practices in to our daily lives to help combat the spread of false media.

Although powerful parties like President Donald Trump claim media is the enemy of the people, fake news is actually less persistent than one might be lead to think. With caution, we can all take measures to ensure that the fake mews that is out there doesn’t get a chance to spread.

1.) Does the URL Look Strange?

Although a lot can be told from a URL, this can be harder to decipher internationally when different formats are used. A good practice is to check out the URL while loading a page, if it is a knock off from a known URL like ‘tv.bbc.com‘ instead of the original bbc.com you might want to ask yourself the following questions.

Most false news plays to the emotions of one group or party, while some just takes things too far like claiming an adored celebrity has died. If something gives you an ‘I can’t believe it’ feeling, it never hurts to investigate it further before taking part in passing along possibly false information.

Are other news sites reporting on this? Has it been de-bunked on any popular myth busting websites like Snopes? If it’s real, it’s more than likely there is more than one new site covering the story.

Re-read the article in a different tone, and see if it takes on a new meaning. Check in to the site, or the writer a bit more to ensure the article that is making you so furious isn’t just someone else’s idea of satirical comedy.

5.) Remember, Everyone is a Publisher.

How is the spelling, grammar, and structure of the article? In this day and age, anyone has the liberty to publish information. Be wary of articles that have no outward links, and articles that don’t cite where information is from.

In the event you run in to fake news, and lets be honest if you’re using the internet your chances are high, keep this handy guide near by. 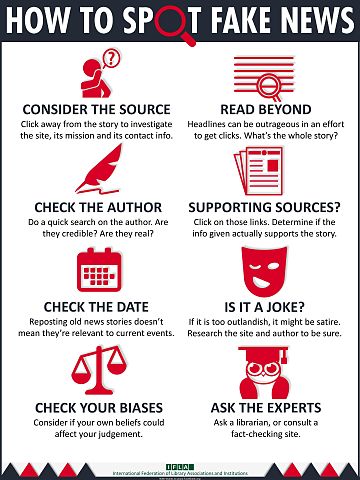 Party Calendar – This Weekend’s Turn Up

New Queen Ifrica Album to be Released in 2017, after Nairobi Tour